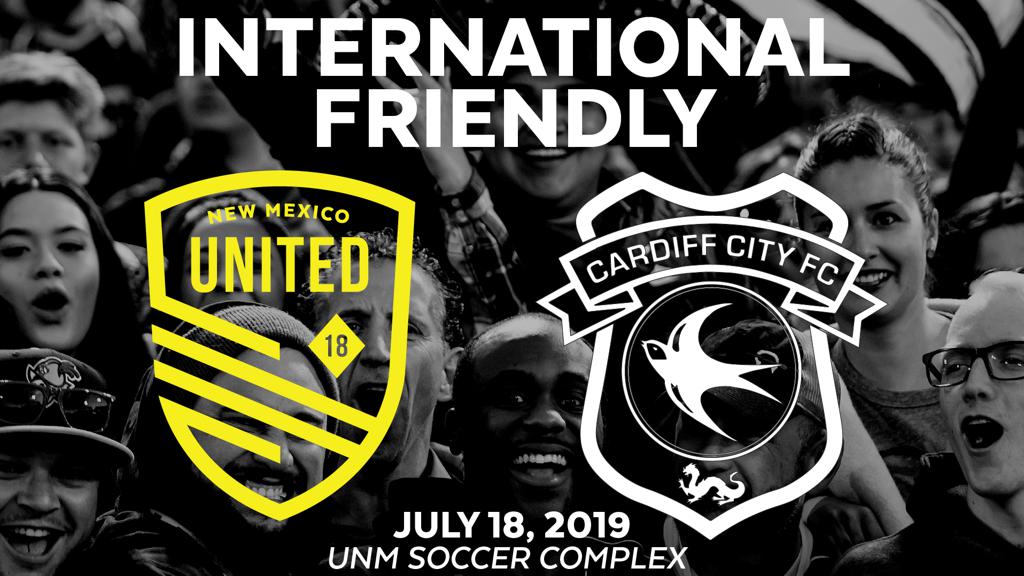 ALBUQUERQUE, NM (May 31, 2019) New Mexico United will face off in an exhibition match with Cardiff City FC, the English Premier League (EPL) team from Wales, on July 18 at the University of New Mexico’s Soccer Complex. United will be hosting Cardiff as a part of the Welsh team’s USA training tour.

“This friendly match against Cardiff City FC is an amazing opportunity for the entire state of New Mexico to be placed on a global stage,” said United Owner and CEO Peter Trevisani. “Our team will have the opportunity to make a strong statement to the world about who we are and about the community that propels us. Cardiff’s supporters travelling for this match will have the opportunity to experience the unique atmosphere that the Land of Enchantment provides.”

Hailing from Cardiff, Wales, Cardiff City FC was founded in 1899 and has a long and storied history in the United Kingdom. As a member of the EPL, their season lasts from August - May. With the 2019/2020 season right around the corner, this friendly exhibition will help them prepare to head back to England and begin their regularly scheduled matches.

“We want to continue to raise the bar for our club in every endeavor we enter into and this international friendly versus Cardiff will be another historic night for our organization. I'm excited to see our players test themselves against a club with a rich history in England's Premier League and Championship,” said Head Coach Troy Lesesne.

“Football is inherent in British culture and heritage. It is part of my country’s DNA. With the rich history and decoration that Cardiff City FC possess, it’s a great honor to be hosting them in New Mexico this season,” said British New Mexico United player Daniel Bruce. “Growing up watching the English Premier League and Championship every weekend, it’s nothing short of a dream come true to have the chance to play against them.”

UNM’s Soccer Complex provides 7000 seats for fans to claim their spot. Current season ticket holders will have the opportunity to claim their reserved seat from June 15 to June 30. The general public will be able to purchase tickets starting on June 15. Tickets will range from $25-$45 and can be purchased in person at the team store, located at 3500 Central Ave, Suite 2 in Albuquerque’s Nob Hill or by calling an account executive at 505-209-7529.

Cardiff City are the only non English side to win the FA Cup - the world’s oldest cup competition, in 1927. Neil Warnock’s team from the Welsh capital city played in the Premier League during the 2018/19 season. Their squad includes the likes of Canadian international Junior Hoilett, Philippines goalkeeper Neil Etheridge and a number of other global stars.