United for the Cup

The most devoted of fans trickled into the Albuquerque International Sunport in the early hours of July 10 with electric energy reminiscent of the 83rd minute of a New Mexico United home game. First Financial Credit Union greeted them with exclusive ‘United for the Cup’ swag bags, creating a sea of black and yellow passengers—much to the bafflement of the Transportation Security Administration. 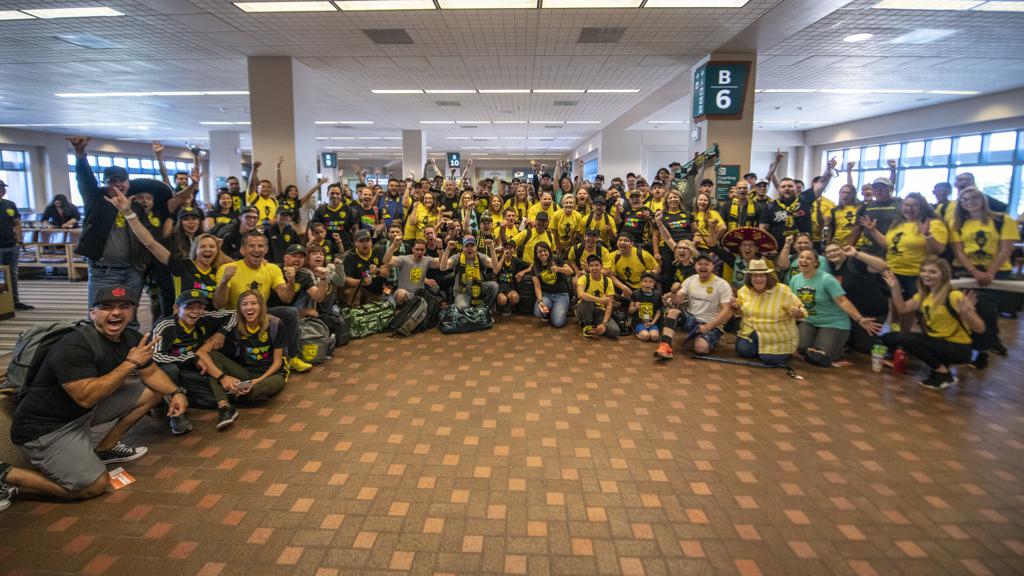 It felt like all of New Mexico was gathered in gate B6 of the terminal, waving their golden tickets, turning heads, and chanting through the airport. This was only the first of many public spaces over the next few days where these crowds would wow innocent bystanders through sheer numbers and intensity.

Good luck tonight, @NewMexicoUTD! Get out there and show Minnesota what New Mexico is made of! #SomosUnidos pic.twitter.com/j3wuq7WfPo

From Governor Michelle Lujan Grisham's video shoutout on Twitter to Albuquerque’s “Metal Mayor” Tim Keller throwing a huge watch party in Civic Plaza, this plane full of New Mexicans carried with them the hopes and dreams of the entire state as they boarded to cheer on New Mexico United in the quarterfinals of the Lamar Hunt U.S. Open Cup. 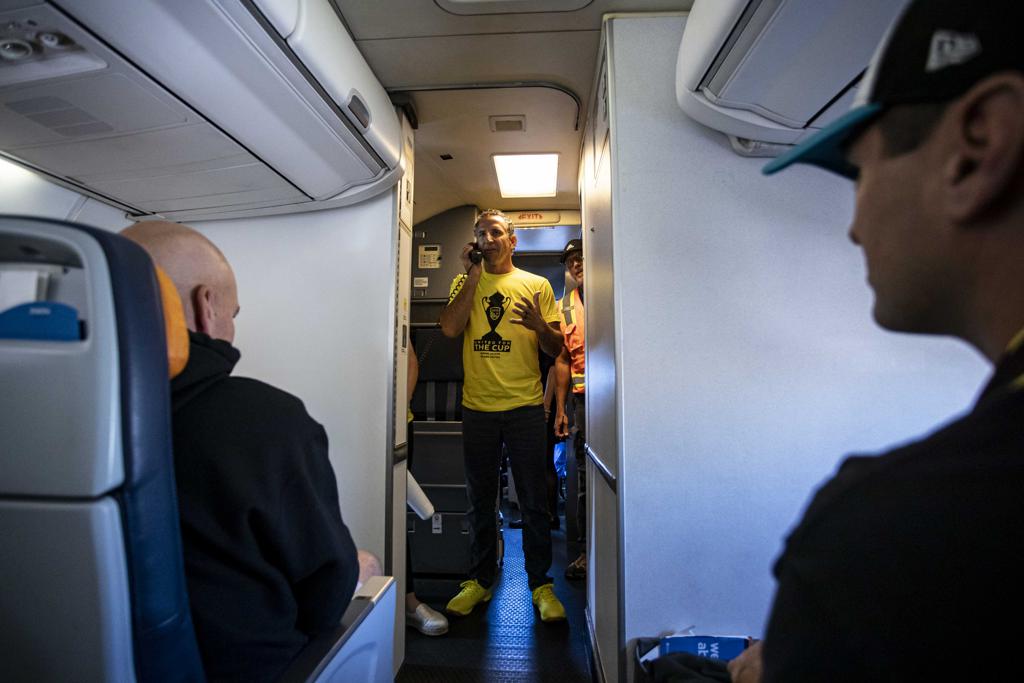 Peter tested FAA guidelines while flaunting some new yellow kicks in his exciting address to New Mexico United’s first full Boeing 737 of similarly sunny clad passengers. He presented a KraneShares away jersey signed by the team to First Financial Credit Union whose generous support made possible this incredible trip, earning New Mexico United fans the envy of soccer club supporters worldwide. New Mexicans from all walks of life bonded for the course of two hours over soccer. This uniting sport, which has seen varying levels of success in our high mountain desert, now held center stage on the worldwide pitch. The excitement was palpable throughout the flight over this attention as fans and the front office staff got to know each other, enthusing about their unique roles in this historic moment. 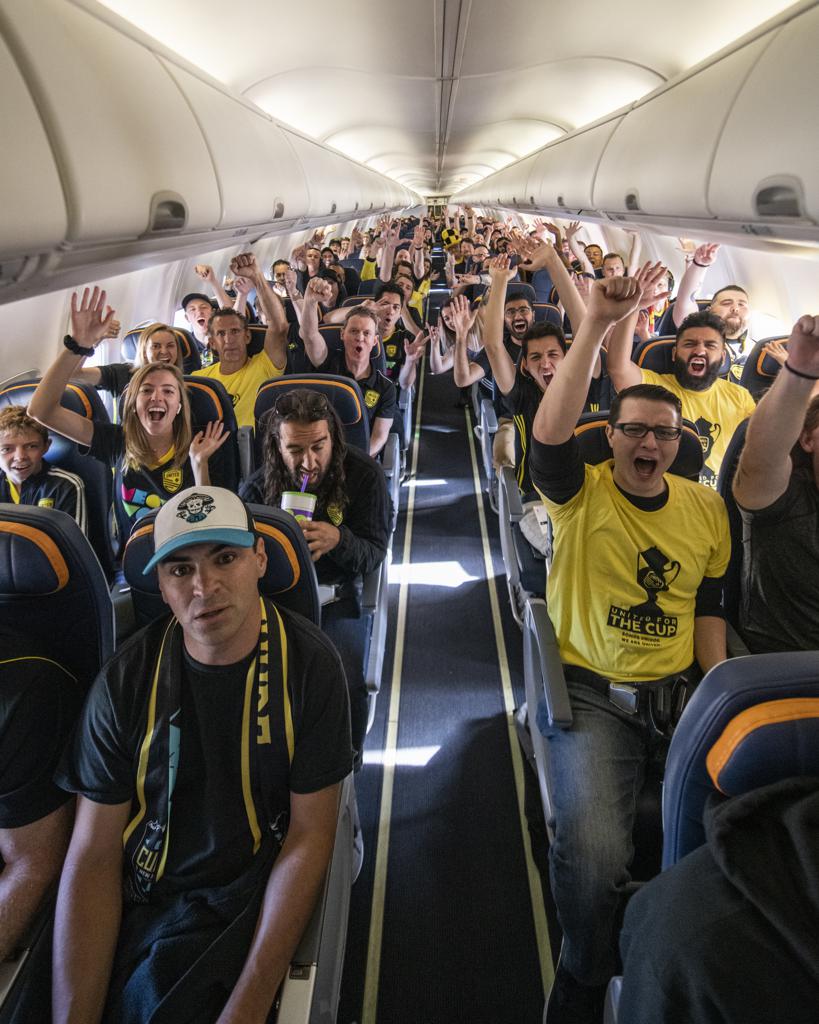 The first yellow shields on New Mexico United’s takeover of Minnesota announced their arrival at baggage claim where two buses waited to whisk these die-hard supporters off in a yellow and black storm. Fans immediately experienced the kindness Minnesotans are well known for upon arrival in the form of libations waiting at their hotel rooms, generously provided as a welcome by the Loon’s supporters group. New Mexico United Supporters quickly threw on jerseys, scarves and other game-day gear before heading towards the stadium in whatever mode of transportation got them there faster. Many took the green line, though, others could be viewed out the tram window racing towards the stadium on orange scooters with their flag capes flying behind them. 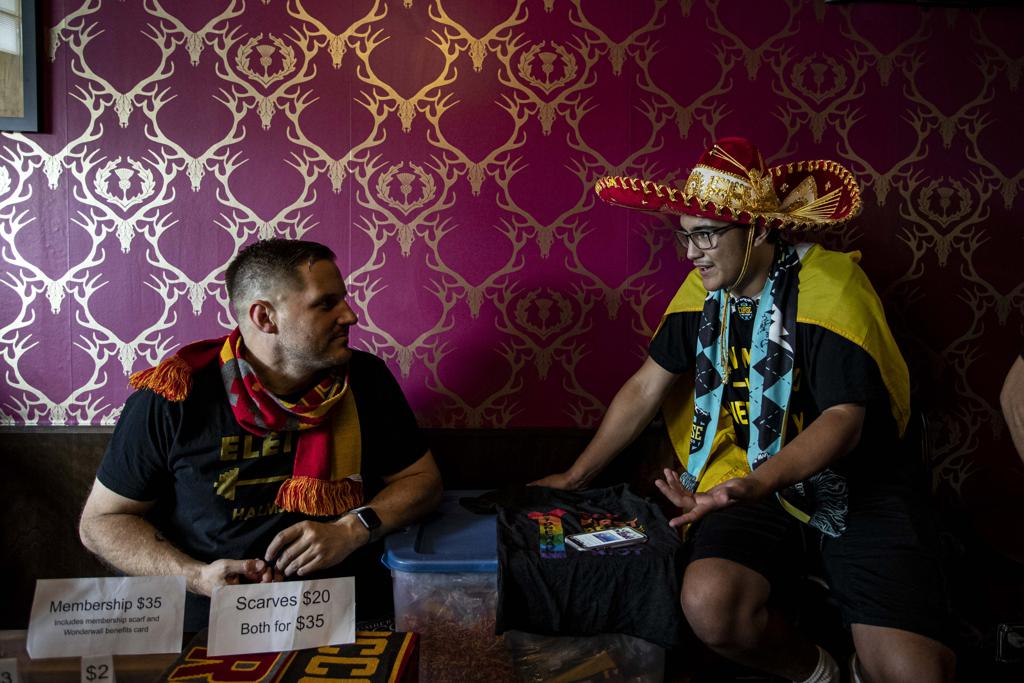 New Mexico United supporters accepted the gracious invitation of their new Minnesotan counterparts to enjoy a pre-game party at Black Hart of St Paul, an LGBTQI+ soccer bar across from Allianz Field. The surprise of the Dark Clouds and True North Elite grew with every large group of Curse members and other supporters that quickly filled out the bar’s multiple large rooms. Morale ran high with fans from both sides enjoying games of pool and darts. The colorful wall of soccer memorabilia above the bar, sporting fan items from all around the country, even got the new adornment of a rainbow flag from New Mexico United’s Pride on the Pitch match. 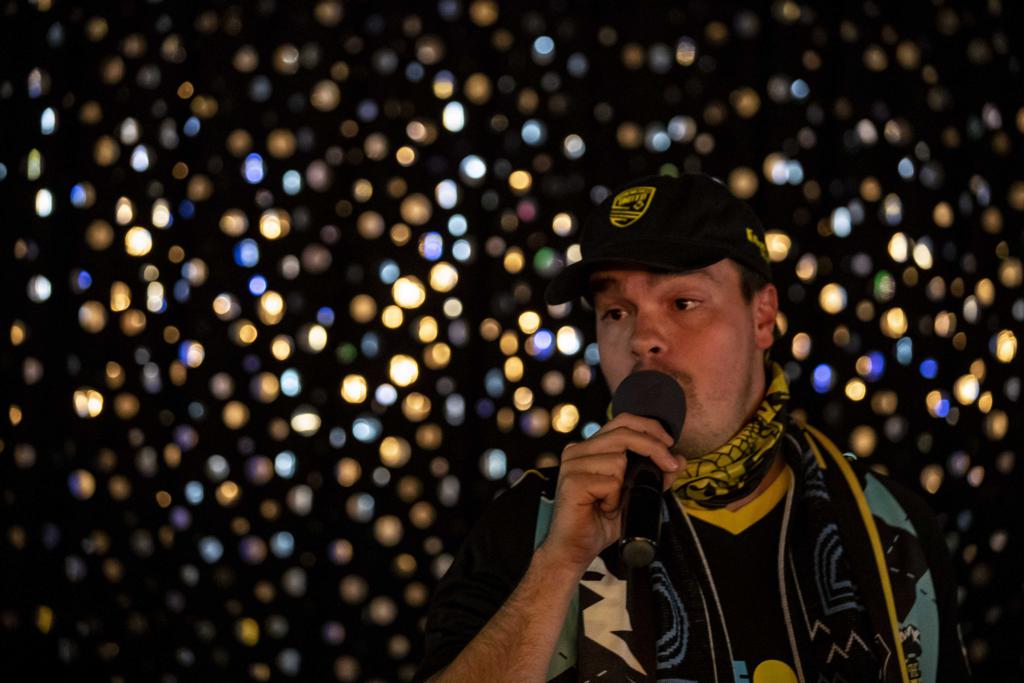 David Carl, the fearless leader of The Curse, took the microphone to energetically address the yellow and black packed bar on a sparkling stage which, after the match, would host a drag show. His hype-inducing speech was joined by raucous chants to kick off the march. Droves of fans with flags, jerseys and various noisemakers took to the streets of Minnesota in possibly the greatest visiting supporter demonstration Minnesota United had ever seen. 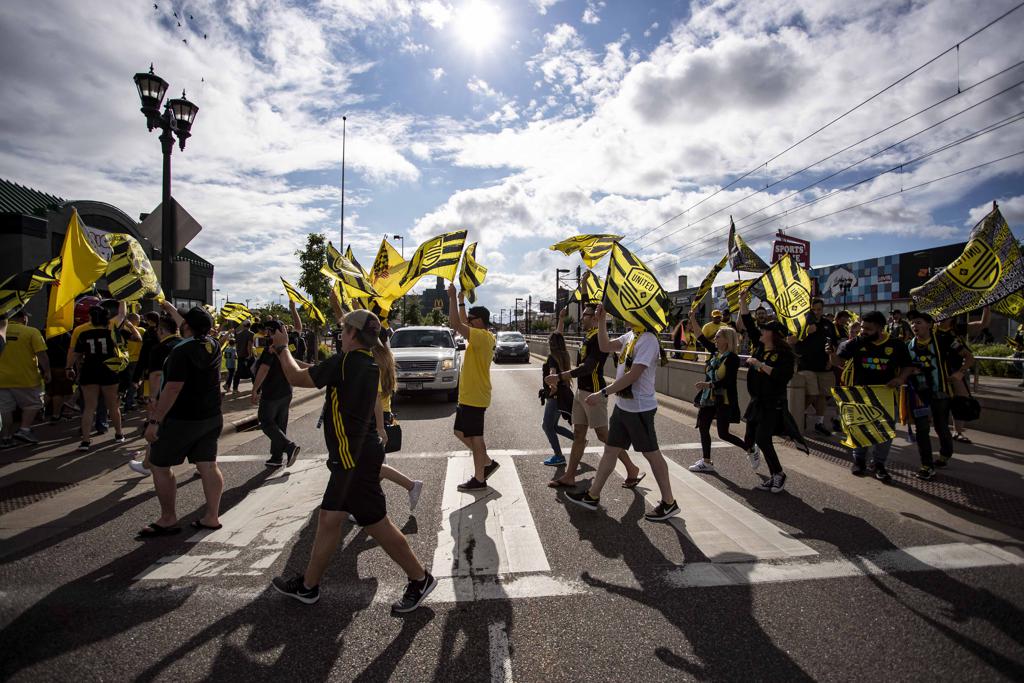 Confused St. Paul drivers watched in shock from their cars as police blocked off the intersection in front of the stadium for the yellow and black parade. Flags bearing the names of New Mexico’s cities, townships and pueblos waved high overhead and chants of ‘Somos Unidos’ rang through the humid Minnesotan air as droves of supporters marched to Allianz Field. Loon supporters stopped in their tracks to whip out their phones and capture the incredible spirit of a Curse pep rally.

your fans are pretty dope pic.twitter.com/5wfxVy0ASP

The yellow triangle at the northeast corner of Allianz Field held its own in a sea of blue—New Mexico cheers deafening amid ferociously waving yellow and black flags. Within the first five minutes, there was a wall of sound perhaps even rivaling the ‘Wonderwall,’ which New Mexico United fans got to experience in all of its glory. But when Santi Moar quickly made the first goal of the match the visiting supporter corner shook the very foundation of the stadium. This explosive frenzy in that acute angle of Allianz Field was relentless, never letting up throughout both 45-minute halves. Even as the Loons gained on and quickly overcame the New Mexican side, passionate guttural cries crescendoed. Southwest supporters went wild screaming with pride just as loud at kickoff as when the buzzer announced the match’s conclusion. 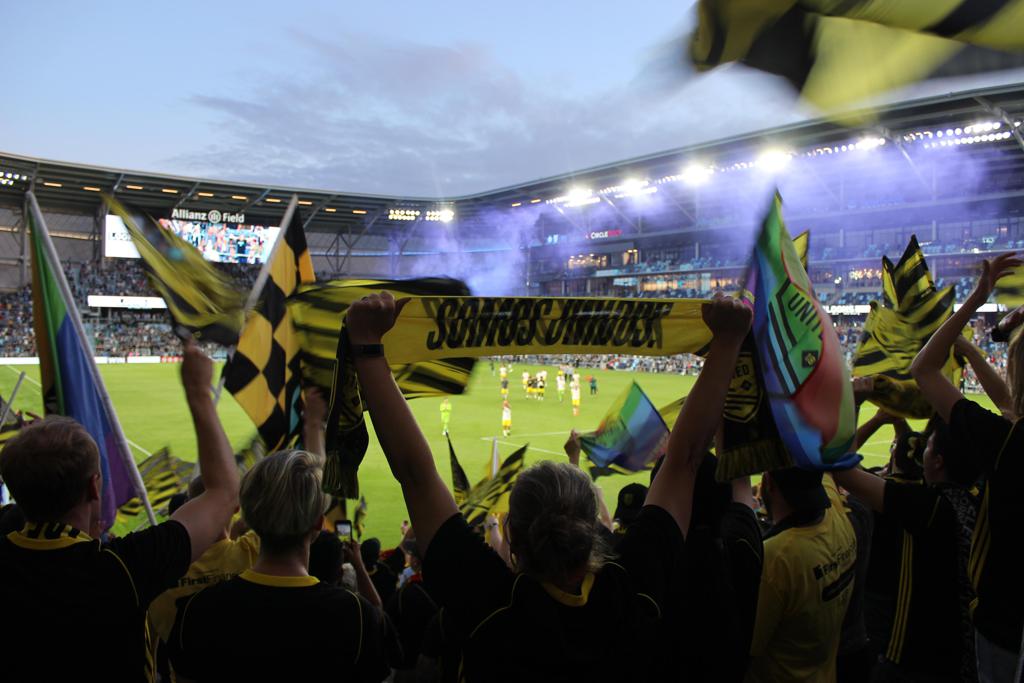 In a puff of dark blue smoke, New Mexico United’s fairytale run at the U.S. Open Cup dissipated. Supporters exited Allianz Field with backs bare and heads held high, still waving their black and yellow symbols of hope. No matter the numbers on the scoreboard, the triumph was in a collective presence at this historic moment. A journey which started in the tears filling owner Peter Trevisani’s eyes as he watched Kevaughn kick the last ball beyond the net in Denver, to the sweat dripping down the scarf-waving front office staffs’ faces in Dallas, to this moment blinded by the lights in Allianz Field, had come to a conclusion. New Mexico United’s concession on that Minnesotan field was by no means an end, but the beginning of the most beautiful sports sojourn that this state has ever seen. New Mexico came together in a way it never has before, showing itself proudly on the world stage. New Mexican culture became a central talking point throughout the international soccer communities. 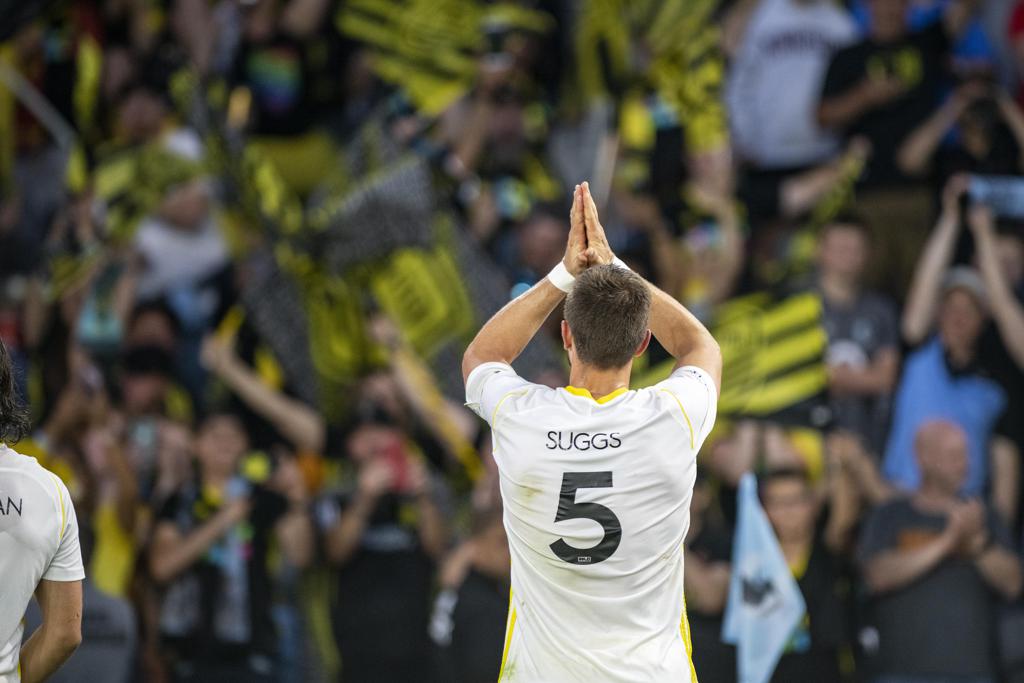 The flight back, while less celebratory, was by no means diminished in energy. There may have been even more black and yellow on the plane when it left Minnesota than when it departed Albuquerque. There were scatterings of light blue and gray from fans who had traded scarves with some Dark Clouds and True North Elite fans to add to their collections as a memento of this historic match. It was a reflective time, for fans and for players to rethink strategy and retarget focus. There are still matches to be won and victories to celebrate, but for those two hours in the air, they took a collective moment to reflect on what they had just accomplished. New Mexico United, which a year ago were just the hopes and dreams of a passionate CEO and Owner, in its very first year got to the quarterfinals of the Lamar Hunt U.S. Open Cup and, up until very recently, sat at the top of the USL Western Conference table for most of the first half of the season. New Mexico United is only halfway through this inaugural season and the excitement around this team is only growing with each passing match.

New Mexico United’s founding mission does not change with the scoreboard. It is a community organization before soccer even enters the equation. Head Coach, Troy Lesesne, said it best in his passionate address that night in the Minnesotan locker room, “We’re in a position right now to make New Mexico matter and we made New Mexico matter. New Mexico cannot ever be forgotten about...ever!” This team, these supporters, this flight, and this match are now forever a part of the fabric for, not only this team’s history but also the history of sports in this beautiful Land of Enchantment.