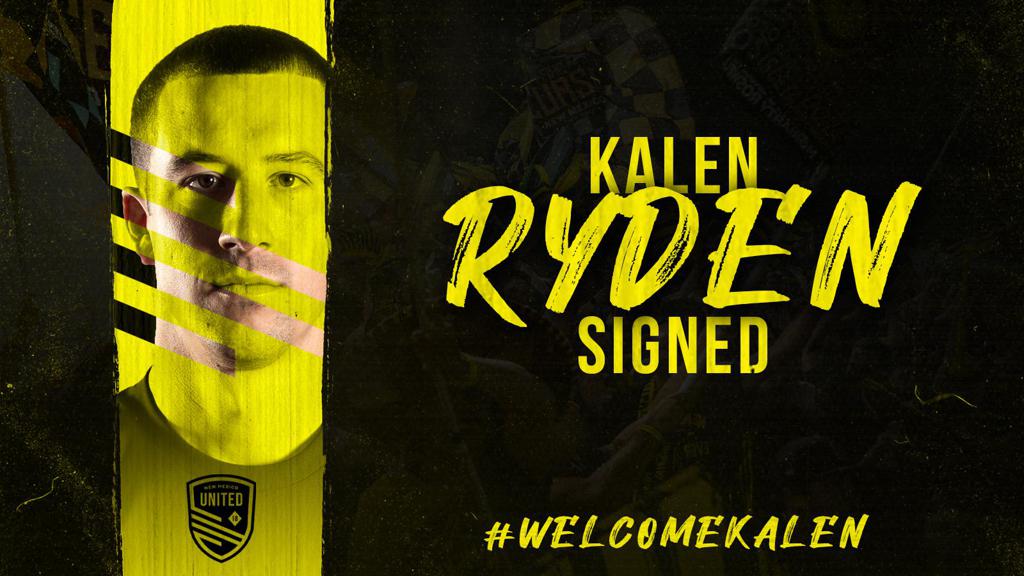 Ryden is NM United’s second new signing for next season, following the signing of midfielder/forward Amando Moreno earlier this month, and the announcement of 15 returning players from the team’s inaugural season.

“Kalen Ryden brings two major qualities to our club that will make an immediate impact,“ said Head Coach Troy Lesesne. “First, his mentality to compete and win is infectious. Secondly, he loves to defend and make life difficult for his opponents. We are thrilled to welcome Kalen to New Mexico United!”

Most recently, Ryden spent the 2018 and 2019 season with USL Championship side Real Monarchs SLC, where he notched 67 appearances, 9 goals, and 3 assists. Deservedly, he was named the team’s Defender of the Year for both seasons and helped the Monarchs find victory in last season’s playoffs, scoring the first goal in the Western Conference Final match against El Paso Locomotive FC and subsequently helped the Monarchs find victory in the  2019 USL Championship final match against Louisville City FC.

“New Mexico United became very well known in its inaugural season, building a very strong community and great product on the field in such a short time,” said Ryden. “I could not be happier to be joining a club culture like that. Troy [Lesesne] is a top coach and is responsible for that success. I am so excited to be joining him, his staff, the team, and the entire New Mexico United fan base.”

Hailing from Norman, Oklahoma, Ryden saw a combined 63 appearances during his college career - playing for both Oral Roberts University in Tulsa and  Midwestern State University in Texas. Ryden then spent some time in USL League 2, making appearances with Des Moines Menace in 2010 and Midland/Odessa Sockers in 2013.

In 2015, Ryden was drafted by the Columbus Crew in the fourth round (69th overall) of the MLS SuperDraft (69th overall). He was then sent on loan to Austin Aztex from 2014-2015, and then later made 38 appearances, 2 goals and 1 assist over two seasons with OKC Energy before spending the 2017 season with Jacksonville Armada.

For photos and videos of Ryden, please click here.