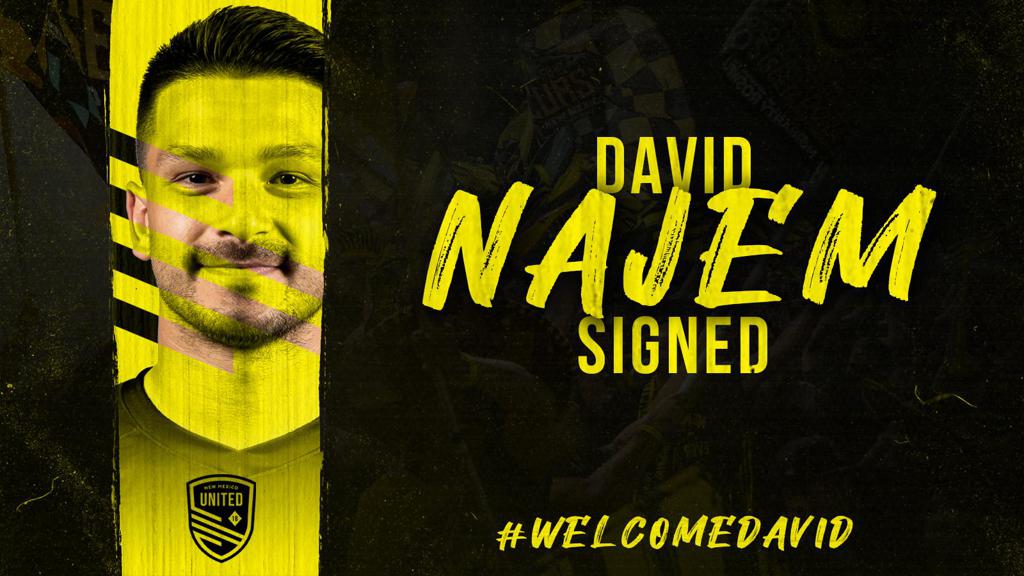 Hailing from Clifton, New Jersey, Najem’s success began early. He spent time in the New York Red Bulls academy from 2010-2016, earned NSCAA New Jersey High School Player of the year, and was named to the NSCAA/Adidas First Team All America.

“I’m thrilled to be joining this exciting new soccer club. What they accomplished on the field and in the community in their inaugural season was truly something special, said Najem. “I can’t wait to get to work to further these successes in year two.“

From 2010 to 2013, Najem played for Columbia University where he made 64 total appearances (61 starts), scored 10 goals, and notched 8 assists. His stellar performance on the field led to him being named Ivy League Rookie of the league two times, and to the Second Team All-Ivy League twice. In his final season with Columbia, Najem was named to the All Ivy-League First Team and was awarded Ivy League Offensive Player of the Year.

“David possesses an incredible mentality that's lifted each club he's played with over the last four seasons in the USL,” said Head Coach Troy Lesesne. “He's superb technically and has a great understanding of the game. I'm looking forward to working with him and seeing the impact he makes with our club.”

After spending two seasons with Bayernliga side FC Eintracht Bamberg, Najem returned to the States to play two seasons for USL championship side New York Red Bulls II, who took home the USL Championship Cup in 2016. Najem most recently was signed with Tampa Bay Rowdies, and currently is a member of the Afghan National Team, with 3 caps and one assist.

About USL
The United Soccer League (USL) is one of the most successful professional soccer leagues in the world, reaching a population of more than 84 million and fueling the growth of the game across North America. Headquartered in Tampa, Florida, the USL provides unparalleled club support with a growing team of more than 50 professionals across 17 departments, ranging from operations to marketing, communications, and sponsorship. www.uslchampionship.com