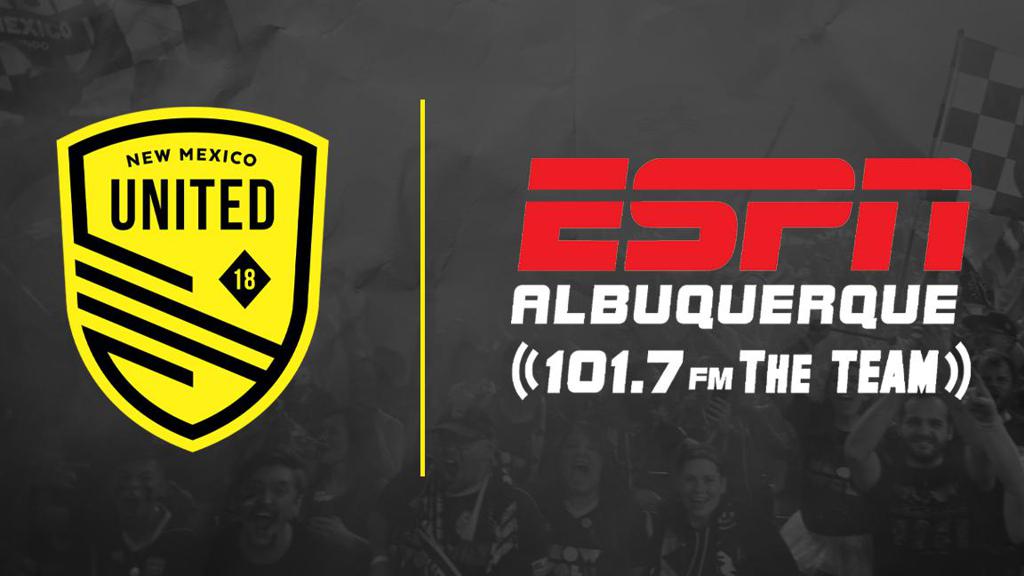 (February 5, 2020) ALBUQUERQUE, NM - Fans of the state’s premier soccer team will have unmatched access to New Mexico United, following an announcement today of the team’s partnership with ESPN Radio 101.7 The TEAM. The local ESPN affiliate will broadcast all seventeen home matches, Lamar Hunt U.S. Open matches, and select away matches. Adam Diehl and Andy Hageman, will call all matches for the radio broadcast.

“Joe is as passionate as they come. He and his entire team have said ‘yes’ since day one” said Peter Trevisani, Majority Owner and CEO of New Mexico United. “Going into season two, we are thrilled to extend and expand our partnership with ESPN 101.7 The TEAM, as they continue to play a crucial role in making United accessible to every New Mexican.”

In addition to broadcasting matches, ESPN 101.7 The TEAM is continuing the ‘United Weekly’ radio show, airing on Saturdays from 11 am - 12 pm MT,  hosted this season by David Carl and RJ Montano, President and Vice President of 'The Curse' Supporters’ Group. United Weekly features commentary on previous and upcoming matches,  interviews with players, coaches and staff of New Mexico United,

“We can’t wait for this season,” said Joe O’Neill, president of ESPN Radio 101.7 The TEAM.  “It is a privilege to work with Peter Trevisani and everyone at New Mexico United.  We are committed to delivering exciting United game broadcasts and much more for United’s dedicated fan base again this season”.