February 8 Friendly is still happening, fans can look forward to seeing all of the 2020 squad take the pitch 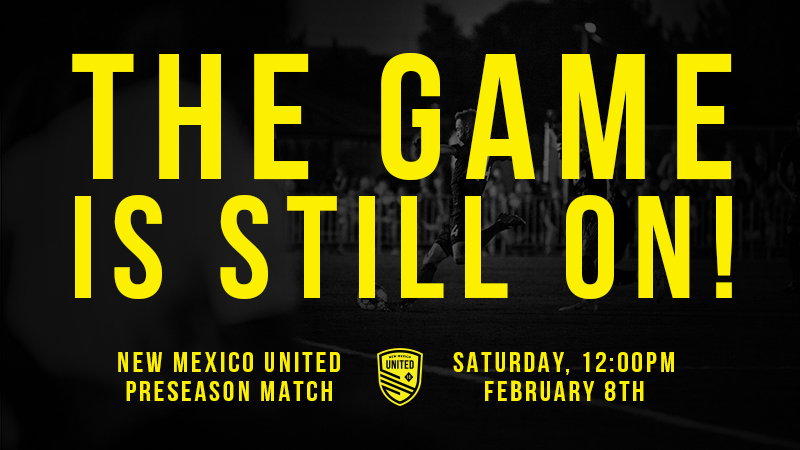 ALBUQUERQUE, NM - The previously announced pre-season friendly tomorrow will look slightly different. Due to weather, Colorado Springs Switchbacks FC is unable to make it tomorrow. The previously planned event is still happening. Fans will have the opportunity to see all 22 of the 2020 New Mexico United roster play on the field against each other, in a Somos Team v. Unidos Team Inter-Squad Scrimmage.

WHAT: Snow in Colorado is preventing the Switchbacks from traveling to Albuquerque for tomorrow’s pre-season friendly. However, fans can STILL expect to see New Mexico United take the pitch. The inter-squad scrimmage game will be played between the Somos Team and the Unidos Team, composed solely of United players. This scrimmage style will allow fans to watch all 22 rostered players take the field. A charity shoot-out is planned following the scrimmage, with $750 being donated to the winning team's charity and $250  to the other.  Watermelon Mountain Ranch and Cuidando Los Ninos will be in the running.

New Mexico United, the state’s professional soccer franchise, brings the most popular sport in the world home to the Land of Enchantment. Fueled by a passion for community, New Mexico United’s promise is to provide a platform that brings New Mexicans together for a unique sporting experience, celebrating the unity and excitement inherent in world-class soccer.