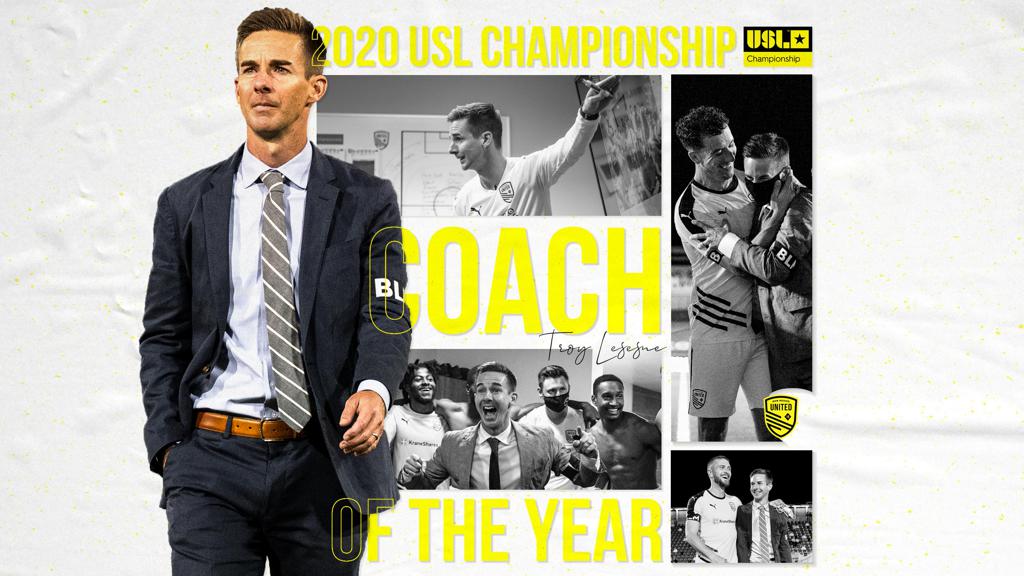 (November 5, 2020)  Albuquerque, NM - Today, New Mexico United and the United Soccer League are proud to announce that New Mexico United’s Head Coach and Technical Director Troy Lesesne is the winner of the 2020 Coach of the Year Award. For the first time in the award’s history, two coaches were named winners, with Reno 1868 FC’s Ian Russell sharing the award with Lesesne.

“While I am honored and humbled by this recognition, this award is absolutely a testament to the incredible resilience and determination our players and staff displayed to overcome an almost insurmountable task of playing all 17 matches away from home and not only clinching a playoff spot but progressing to the Western Conference Semifinals,” said Lesesne. “I'm proud of our progress in year two and look forward to building off this memorable 2020 campaign going into next season.”

Lesesne led New Mexico United to the Western Conference Semifinal in just the club’s second year, leading the club to the playoffs for the second straight season. Lesesne and his players and technical staff faced an uphill battle throughout the season, as the only club in American soccer playing every match on the road. Despite this, the club improved dramatically in its second season, drastically lowering the club’s goals against average, and improving defensive efficiency.

“Working alongside Troy for these past two seasons has been an absolute honor and a pleasure,” said New Mexico United Captain Josh Suggs. “Troy pushes us to not only be better soccer players, but better men. To say that he is deserving of this award is an understatement. He has striven for excellence in even the most adverse circumstances. The best coaches are those who promote growth in their players, and every player who has come into contact with Troy has grown immensely.”

Off the pitch, Lesesne is a source of pride for New Mexicans - continuing to make the community a better place through service and leadership. Recently, Lesesne - alongside the Somos Unidos Foundation - created, led and championed New Mexico United’s Diversity Fellowship Program - a first of its kind program aimed at creating opportunities and platforms for women and people of color in soccer, providing elite level training and mentorship in coaching and front office capacities.