NEW MEXICO UNITED ANNOUNCES THE SIGNING OF ISIDRO MARTINEZ, THEIR FOURTH NEW SIGNING AHEAD OF THE 2021 SEASON 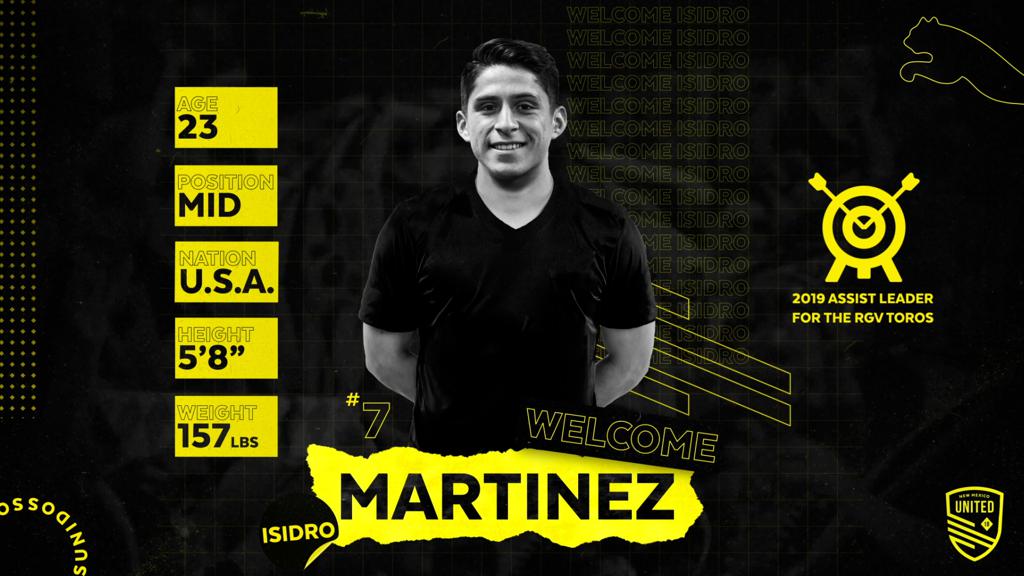 (January 4, 2021)  Albuquerque, NM - New Mexico United is excited to announce the signing of Isidro Martinez ahead of the 2021 USL Championship Season. Martinez, who played the last two seasons with Rio Grande Valley Toros FC, comes to New Mexico having played in all 48 matches since his professional debut, and starting 43 of 48. In 2019, the midfielder/forward set the RGVFC record with 8 assists on the season.

“Isidro is an intelligent center midfielder that understands how to set the rhythm for his team, along with having the quality to play the final pass,” said New Mexico United Head Coach/Technical Director Troy Lesesne. “He has a fantastic engine and is willing to run for his teammates. I’m looking forward to seeing the impact he makes with our club.”

In addition to a successful and impactful two years with RGVFC, Martinez tallied nine goals and 13 assists at the University of Texas Rio Grande Valley. (2015-2018) He also played for USL League 2’s South Georgia Tormenta in 2018, where he appeared in 12 matches. In 2015, Martinez was named the USA Today Gatorade Boys Soccer Player of the Year.