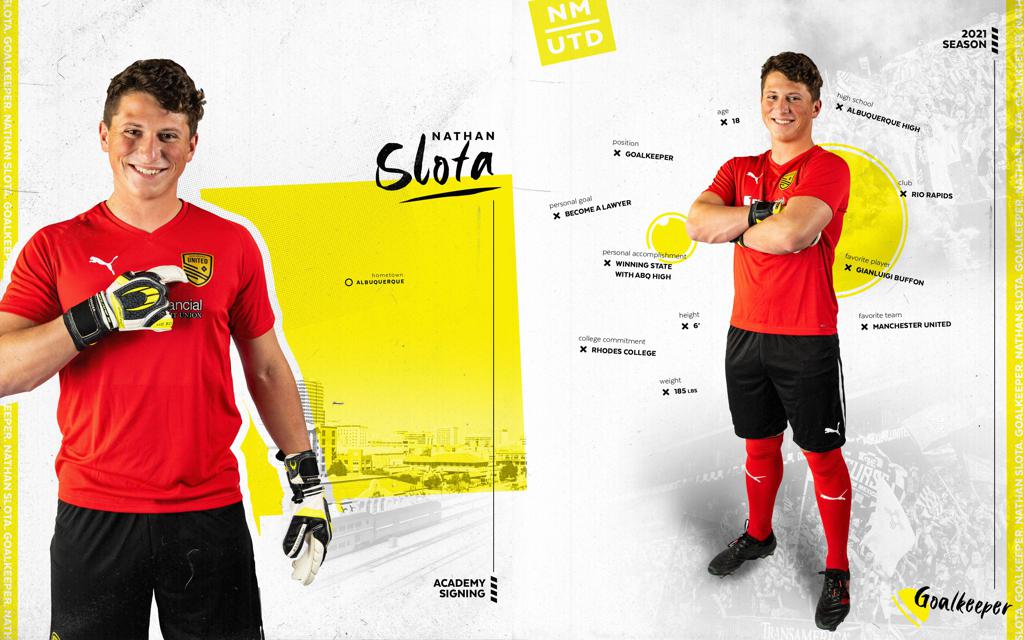 (January 27, 2021)  Albuquerque, NM - New Mexico United and the Somos Unidos Foundation are thrilled to announce the signing of the seventh Academy player in their history. Goalkeeper Nathan Slota will join the New Mexico United Academy Team for the 2021 season. Slota won a state title with Albuquerque High School, has played club soccer with Rio Rapids, and has committed to playing college soccer at Rhodes College.

“Nate's break-out season last year for Albuquerque High was full of confidence as he made critical saves in each of our last 5 games leading to the championship,” said Slota’s AHS coach Lucien Starzynski. “He's mature, works hard, enjoys training, and is a great teammate.”

Slota’s favorite soccer team is Manchester United and his favorite player is Wayne Rooney. Slota, like every player in New Mexico United’s Academy, will be fully scholarshipped into the program. These scholarships include registration, travel, equipment, and coaching costs. No player will have to pay a cent to compete in New Mexico United’s academy. These scholarships are made possible through the Somos Unidos Foundation and the generosity of community partners and individuals.

If you are interested in sponsoring Nathan or any of our Academy players/programs, please visit: https://forms.gle/obwQX9a6ZYrGGtQz5

If your child is interested in trying out for the New Mexico United academy, please visit: https://forms.gle/P63Fng7bHX6uKqdF6

New Mexico United Academy kicks off in 2021, and will provide the highest level of youth soccer instruction and training at no cost to any participant. Travel, equipment, training and registration are all included in scholarships provided for each participant. To learn more about our goal of providing the best possible soccer education for every New Mexican, visit somosunidosfoundation.org/academy