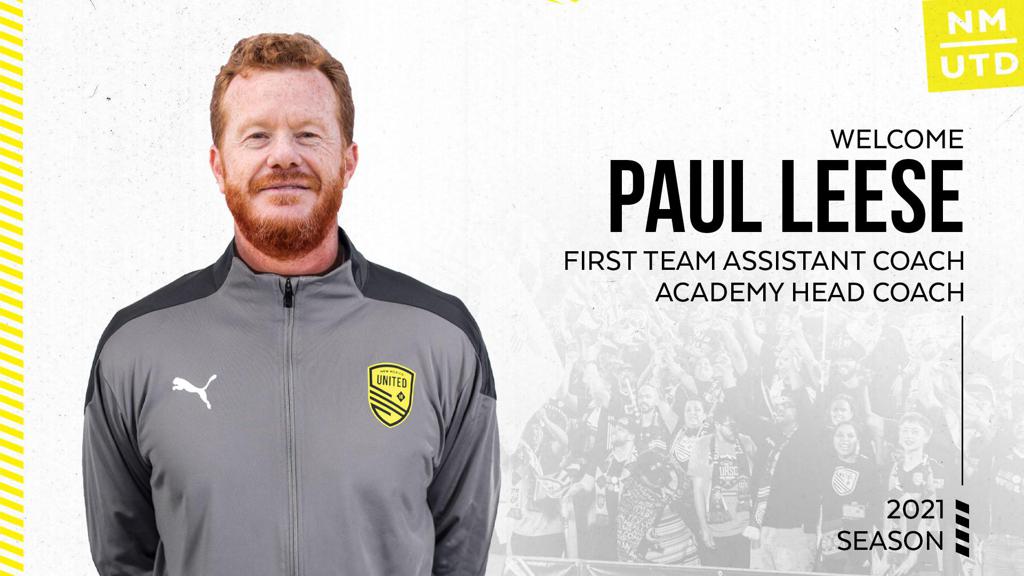 (February 19, 2021)  Albuquerque, NM - New Mexico United is thrilled to announce the signing of Paul Leese to serve in the role of First Team Assistant Coach and Academy Head Coach for the 2021 season. Leese is coming off an incredible 17-season collegiate coaching career that saw him win conference championships, tournaments and more. Leese most recently rebuilt the University of Texas - RGV Men’s Soccer program - taking it from a team just re-entering Division I after an 18-year hiatus in 2015, to a team that entered the top-25 for the first time just five years later in 2019.

“We are thrilled to have Paul join our first team staff and also lead our youth academy in it's inaugural season,” said New Mexico United Head Coach and Technical Director Troy Lesesne. “I've admired the work he's done for many years at the collegiate level and to have someone with his experience will undoubtedly make a major impact with both our senior and our youth players.”

Prior to Leese’s time at UTRGV Leese’s head coaching career began at Coker College in 2009, where he won multiple conference titles, reached as high as #5 in the nation, and was named the 2012 conference Coach of the Year. Leese also served as an assistant coach with Elon University, Furman University and Coastal Carolina University prior to arriving at Coker.

Leese’s career also includes USL Action on the pitch, as well. The Liverpool native played for the Greenville Lions and Carolina Dynamo, and was also a member of the 1999 British University National Team. Leese has also guided academy players in the School of Excellence at Chester F.C., and develops youth players as the director and founder of ESB Soccer.