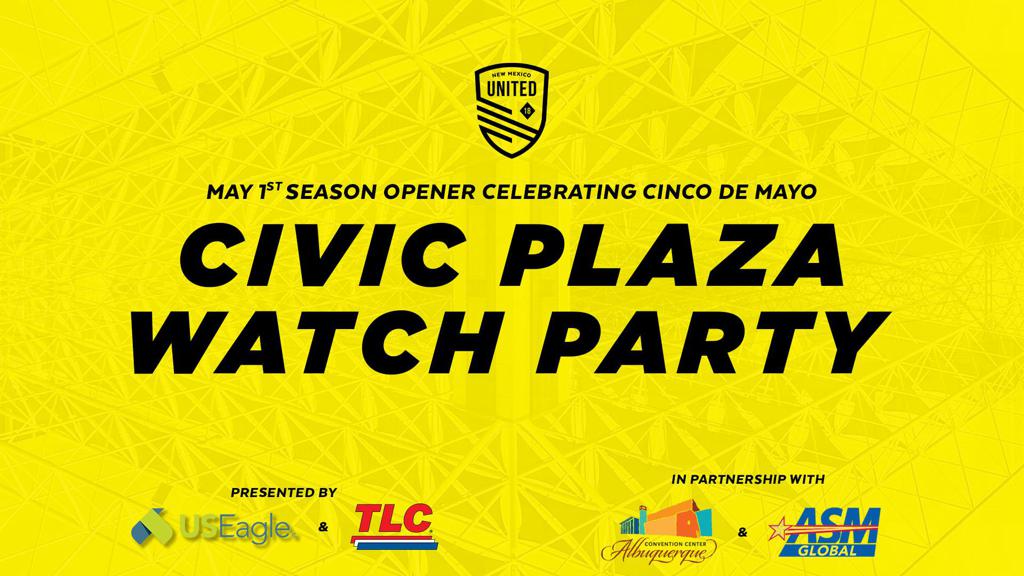 (April 22, 2021)  Albuquerque, NM - New Mexico United, and presenting partners TLC and US Eagle Federal Credit Union are excited to announce the 2021 Civic Plaza Watch Party Series, which will bring together fans in a safe, socially-distanced way to enjoy New Mexico United away matches throughout the 2021 season. The series will feature socially-distanced pods across Civic Plaza in Albuquerque for the below matches, allowing fans to cheer on their club in a safe way, and kicks off with New Mexico United’s season opener on May 1st against RGV Toros FC, with future dates to be announced.

“We’re so excited to kick this series off,” said New Mexico United President/CEO Peter Trevisani. “Civic Plaza is at the heart of Albuquerque, and we are thrilled to partner with US Eagle Federal Credit Union and TLC to welcome in fans as they give their hearts and cheer their club on to a title!”

New Mexico United’s regular season opens on May 1st, with the home opener scheduled for two weeks later against Austin Bold. The matches included in this series will specifically include away matches. Additional dates for the matches to be included will be announced soon.

UPDATE: THE AVAILABLE PODS HAVE SOLD OUT!!! (IN LESS THAN 2 HOURS) WE WILL HAVE 50 PODS AVAILABLE FOR WALK UP PURCHASES ON THE DAY OF THE EVENT. SOMOS UNIDOS!