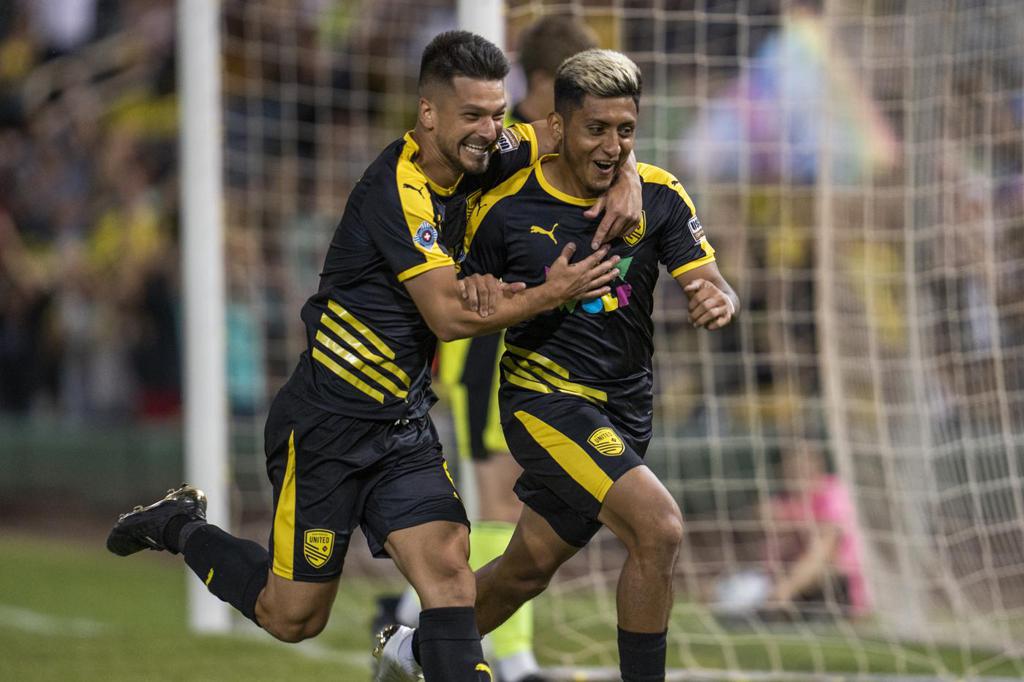 (September 18, 2021)  Albuquerque, NM - New Mexico United topped Mountain Division opponent Real Monarchs by a final score of 2-1 for their second straight home win on Saturday night. Goals from Amando Moreno and Chris Wehan paced the Black and Yellow, as they swatted away a valiant effort from the Monarchs.

United controlled much of the pace and tenor of the match, looking dangerous from the get-go and finishing the match with 26 shots to just seven for Real Monarchs SLC, and a 9-1 advantage in shots on goal. United also held a 61% to 39% edge in possession, and could have scored a few more if not for a few excellent saves from Real Monarchs SLC goalkeeper Jeff Dewsnup, including a 55th minute penalty stop, and a few more shots that clattered off of posts and crossbars.

It didn’t take long for things to heat up in the second half, after the first 45 minutes ended scoreless. In the 48th minute, it was Amando Moreno who opened the scoring for United, taking a ball through the center of the pitch and cutting left and right to shake off two defenders before firing into the top right corner to give United a 1-nil lead.

That advantage would only last for two minutes, though, as Charlie Wehan pulled the Monarchs back with an individual effort of his own, taking a pass through center and pushing his first touch out wide of the defense before slotting home low past Alex Tambakis. The goal would be Monarchs only shot on goal of the match, as United’s defense stood strong.

Not to be outdone by his younger brother, Chris Wehan sealed the victory for United. Daniel Bruce took a long pass from Chelo Martinez after the latter picked the pocket of a Monarchs attacker. Bruce calmly waited for help and worked toward the endline before finding the head of a streaking Wehan for the game’s final goal.