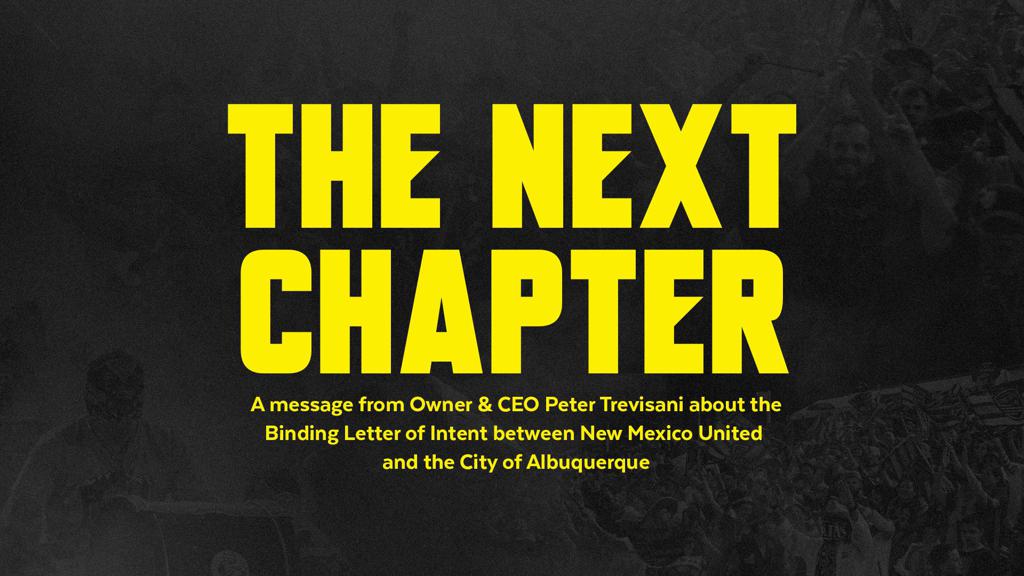 In 2018, myself and 5 other New Mexican investors found ourselves facing a complex decision - take an enormous leap of faith and bring professional soccer to New Mexico, or listen to the cynics, the pessimists, and the less-than-inspiring spreadsheets to avoid becoming the next failed sports team. We chose the first option because we believed something that the spreadsheets could never capture - we believed in the spirit of New Mexico, the grit of New Mexicans, and the amazing things we could do if we created one more reason for the state and its people to UNITE!

On March 9th, 2019 we witnessed something that erased just about every doubt. Twelve thousand New Mexicans showed up in yellow and black, and for 90 minutes there were no lines of differentiation. Fans of different ages, religions, races, and orientations completely forgot about their differences, and became the united force that we now know as the Yellow and Black Army. When Devon Sandoval blasted in the first goal in team history, the stadium literally shook, the sound was deafening, and the United journey was in full swing.

The magic moments of 2019 were innumerable: Being number one in league attendance, a magical run to the quarterfinals of the US Open Cup, incredible theme nights including the first ever Meow Wolf Night, and qualifying for the playoffs in our inaugural season. As amazing as all of those “big” things were, the real magic was happening behind the fanfare: New friendships, stronger families, and maybe most importantly, a renewed sense of hope for the future and our state.

The momentum going into 2020 could not have been stronger. The coaches were signing some incredible additions to the squad, season ticket sales were outpacing every projection chart, and we were poised to make the second season a supercharged version of the first.

And then the world locked down.

Yes, the USL Championship season resumed in July, but due to circumstances outside of our control, we weren’t able to play a single home game. Without our number one revenue source, tickets, how were we supposed to survive?

But we said what all of us say: Don’t ever bet against New Mexico! With every odd stacked against us, the United family stepped up in unimaginable ways. Rather than recoup the money they spent on season tickets, so many individuals and families donated their dollars to the Somos Unidos Foundation. When we needed supplies for vulnerable communities, or blood donations, or money to build desks for remote learners, the Black and Yellow family was there in droves. When we had the opportunity for a “home game” in Colorado Springs, our supporters bought every ticket they could and journeyed 5 hours north to cheer on our team. We survived the most challenging year for professional sports the same way we started. Together.

The shadow of the pandemic still looms large, and normalcy is still a ways off, but fans are back in the stands, the drums are banging, the flags are waving, and the smoke bombs are billowing out of The Lab once again.

So what’s the next chapter?

It’s something we’ve talked about since day one: The Stadium. A gathering place for New Mexicans, a hub of innovation, a celebration of the state, and a symbol of hope for generations to come. This stadium has always been and will always be about so much more than soccer. It’s about progress, elevating our state, and a belief that we deserve good things. It will undoubtedly be an economic catalyst but more importantly it will be a catalyst of dreams.

Today’s binding letter of intent with the City of Albuquerque is about more than dollars. Yes, we are pledging $32.5 million of total investment, including $10 million upfront in capital investment that will lead to 780 jobs without raising taxes a dime. But beyond that, this letter is a promise. A promise that we’re fully invested, that we’ll be in the Land of Enchantment for a long time, and that we’ll never stop working and doing our part to help create the best possible version of New Mexico.

We may be in year 3, but we are just getting started. Together, dreams and aspirations can become a reality.