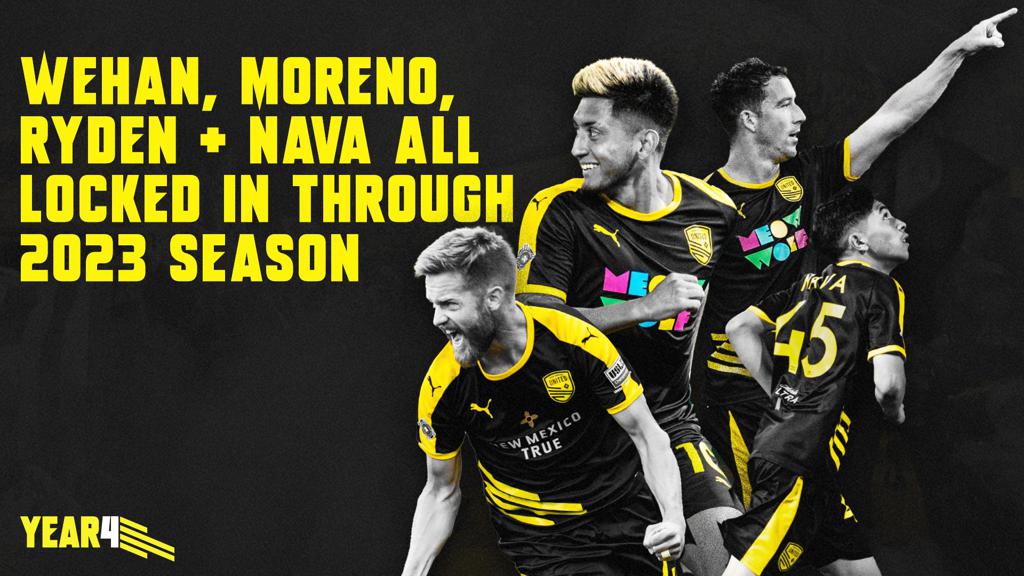 (November 18, 2021)  Albuquerque, NM - New Mexico United is excited to announce the first steps in the formation of the 2022 USL Championship roster. Forwards Amando Moreno and Cristian Nava, Defender Kalen Ryden, and Midfielder Chris Wehan will return for the 2022 season, as they are already under contract through the end of 2023.

“These four players excel on and off the pitch, and will be crucial in our quest to bring a championship to New Mexico,” said New Mexico United Owner/President Peter Trevisani. “They are wonderful representatives of our club and community. We are thrilled to welcome Amando, Cristian, Kalen, and Chris back for the 2022 season and beyond.”

Over the last two seasons (‘20-’21), Moreno has seen the pitch in 36 matches for United, starting 31 and scoring 11 goals, while assisting another five. He has been a consistent attacking threat for United.

Nava - an Albuquerque native - joined United as the first academy product to sign a professional contract in their history in 2021. He made five appearances in his first pro season at age 17.

Kalen Ryden has been a defensive stalwart for United in his two seasons with the club, appearing in 46 matches and starting 45, and serving as one of United’s captains in 2021. In the same year, Ryden led United with 107 clearances, 21 blocks and 135 duels won.

One of United’s original signings in 2019, Wehan has played two and a half seasons with the club, appearing in 65 matches and earning the title of United’s all-time goal scoring leader with 28 tallies for the Black and Yellow.

United will continue to announce returning players, option pick-ups, and new signings throughout the offseason. Head Coach/Technical Director Zach Prince and his staff are hard at work creating the roster ahead of the 2022 USL Championship season.