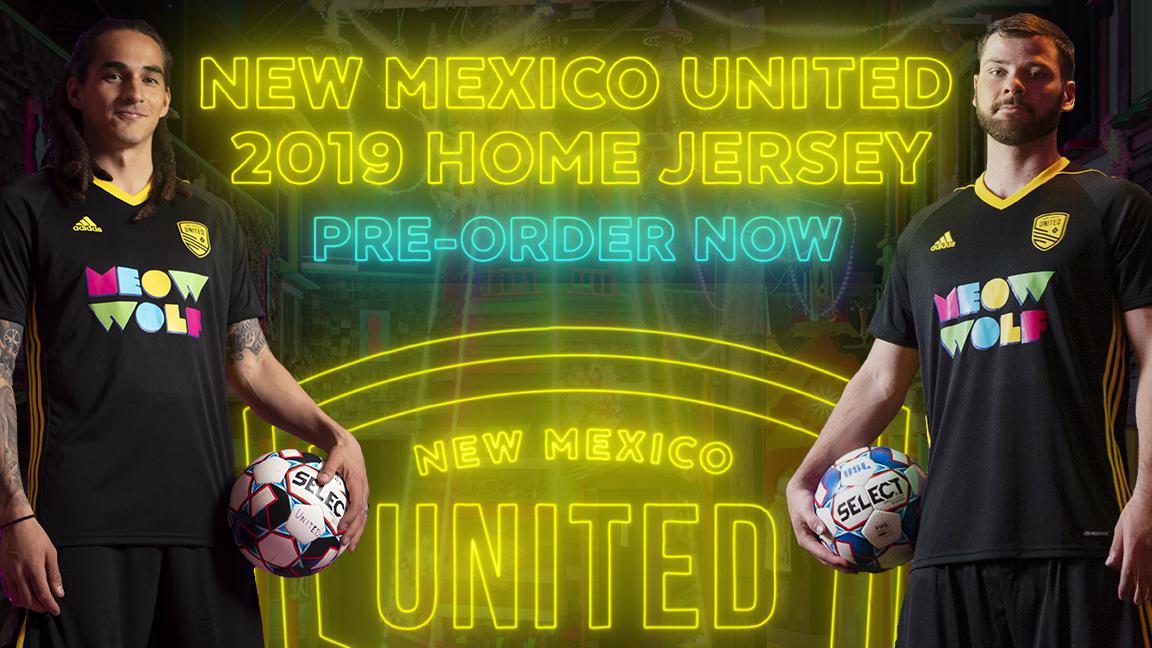 ALBUQUERQUE, NM (February 7, 2019) New Mexico United and Meow Wolf are proud to announce their partnership and reveal the home jersey for the team’s 2019 season at Isotopes Park. The partnership between New Mexico’s professional soccer team and the Santa Fe based, world-renowned art collective is unique in the sports world, and represents the artisan culture prevalent in New Mexico.

“We are the only professional team in the world that is partnering with an art collective as a front of the jersey sponsor. Meow Wolf and New Mexico United are fiercely aligned when it comes to being agents of positive change for the state of New Mexico, said New Mexico United Owner and CEO Peter Trevisani. “Bridging art and sport in this way is not just ambitious, its uncharted territory. Our partnership goes beyond soccer. We will be curating events together for games and for our community. We are creating a blueprint that will be followed by other teams in other cities and countries in the years to come.”

House of Eternal Return by Meow Wolf hosts half a million visitors a year in Santa Fe and was recently named the #4 Best Experience in The World. Meow Wolf challenges a wide variety of paradigms as it invents a whole new form of storytelling, pays artists commensurate with our culture’s high-demand for art, gives generously throughout community, and always goes maximal.

“Sports and arts are quite aligned in my mind,” said Meow Wolf CEO Vince Kadlubek. “Both depend on the ability to envision and then act to create that vision. When groups of artists come together, they rise or fall in the same ways that great teams do—sacrificing the individual for the collective, supporting each other no matter how tough it gets. Both are able to bring fun, unity and inspiration to the community. New Mexico is world-renowned for arts and now is the time we go big in sports too, and New Mexico United is just the organization to do it.” 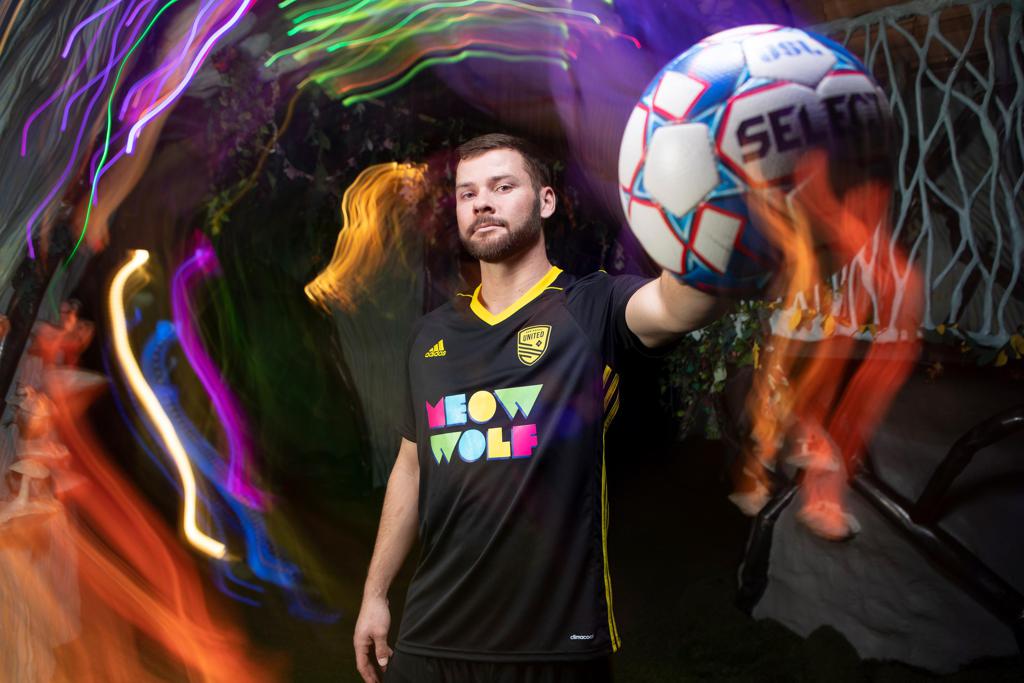 The official home kit, manufactured by long-time soccer brand, Adidas, features a sleek, black jersey with the Meow Wolf logo in its full, colorful, artistic glory front and center on the chest. The signature Adidas lines run down both shoulders of the jersey in New Mexico United yellow. The front also showcases a yellow Adidas logo and the New Mexico United shield. The full, official black kits include black shorts with matching yellow lines and black socks with yellow stripes around the knee. The official New Mexico United/Meow Wolf home jersey is available for preorder for $85 for both the men’s and women’s, and $75 for youth at shop.newmexicoutd.com.

“Our goal when designing the club's inaugural kit was to create a product that would be distinct and timeless,” said Head Coach Troy Lesesne. “The home kit truly evokes both characteristics and our players are going to wear it with an incredible amount of pride this season.” 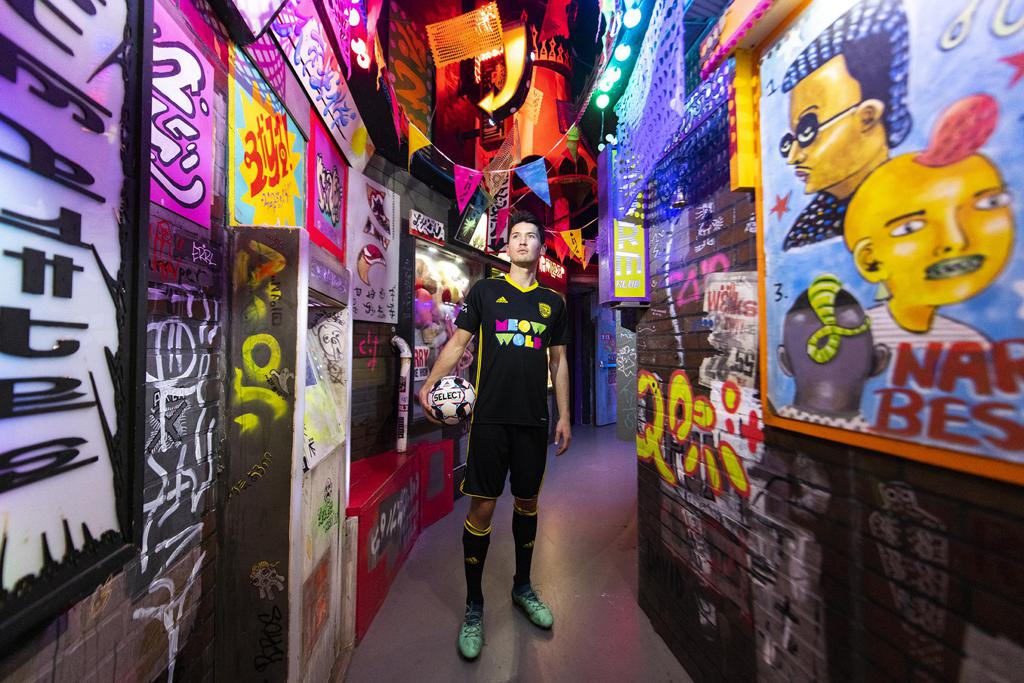 New Mexico United will play their first public preseason game against the University of Denver at the UNM Soccer Complex on February 18 at noon. General admission tickets are $10 for the public. Tickets are free for all students with a valid student ID.

Regular advanced single tickets, season tickets and group tickets to New Mexico United matches at Isotopes Park are on sale now at www.newmexicoutd.com/tickets, with tickets starting as low as $10/match.

About New Mexico United New Mexico United, the state’s first professional soccer franchise, brings the most popular sport in the world home to the Land of Enchantment. Fueled by a passion for community, New Mexico United’s promise is to provide a platform that brings New Mexicans together for a unique sporting experience, celebrating the unity and excitement inherent in world-class soccer. The New Mexico United inaugural season kicks off on March 9, 2019 at Isotopes Park. www.newmexicoutd.com

About Meow Wolf Meow Wolf is a Santa Fe-based arts and entertainment group that creates immersive, interactive experiences to transport audiences of all ages into fantastic realms of story and exploration. The company's first location showcases the THEA Award-winning, international sensation House of Eternal Return where over one and a half million visitors have discovered a multidimensional mystery house with secret passages, portals to magical worlds, climbing apparatus, and surreal, maximalist & mesmerizing art exhibits along with a Learning Center and Float Café. The location is also home to a music venue, bar, and outdoor dining scene. In 2018 Meow Wolf announced plans for massive new permanent locations, in Denver, Las Vegas & Washington, D.C., and the world’s first artist-driven dark ride at Elitch Gardens with more major announcements to come soon. www.meowwolf.com

About USL The USL is one of the most successful professional soccer leagues in the world, reaching a population of more than 84 million and fueling the growth of the game across North America. Headquartered in Tampa, Florida, the USL provides unparalleled club support with a growing team of more than 50 professionals across 17 departments, ranging from operations to marketing, communications and sponsorship. The USL has a national media partnership with ESPN, wherein all league matches are broadcast on ESPN+, ESPN3 and across linear channels. The league also operates USL Productions, which includes a state-of-the-art facility that produces and distributes more than 500 league matches and more than 1,000 hours of original content to national partners, local affiliates and international markets throughout the 2018 season. www.usl.com